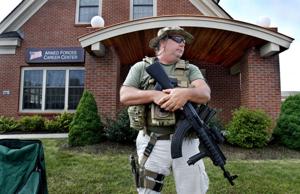 Jeff Roy of Ashburnham, Mass., is heavily armed as he stands guard outside the Armed Forces Career Center on West Street in Keene this morning. Roy is a member of the Patriot Mutual Assistance Group taking part in an operation run by the Oath Keepers of New Hampshire.

In a scene being played out across the nation, a group of armed volunteers plans to guard the armed forces recruitment center in Keene, N.H., this week in the wake of the July 16 shooting at a recruitment center in Chattanooga, Tenn. Two US Army veterans stood on the sidewalk Monday morning outside the building dressed in Army colors of green and tan and holding rifles. Openly carrying a firearm does not require a permit in New Hampshire. Chris Rietmann of Alstead is a member of the Oath Keepers of New Hampshire, a group of current and former military officers, police, and first responders who pledge to protect the ideas in the US Constitution. Rietmann said he was there in response to the fatal shooting of four Marines outside the Chattanooga recruitment center on Thursday. A naval officer wounded in the attack died Saturday, and a Marine recruiter who was shot in the leg and a Chattanooga police officer are recovering from injuries. Keene police Sgt. James Cemorelis said that the recruiters are not permitted to carry weapons. An article posted Saturday on the Oath Keepers’ website said Arkansas Oath Keepers had launched “Operation Protect the Protectors” the day before. The mission, which is similar to the one taking place in Keene, “will continue until Congress passes a carry revision or recruitment centers feel they no longer need our protection,” according to the article.

There’s nothing partisan about wanting to protect our borders to encourage LEGAL immigration. Please enter through the front door.

President of the United States